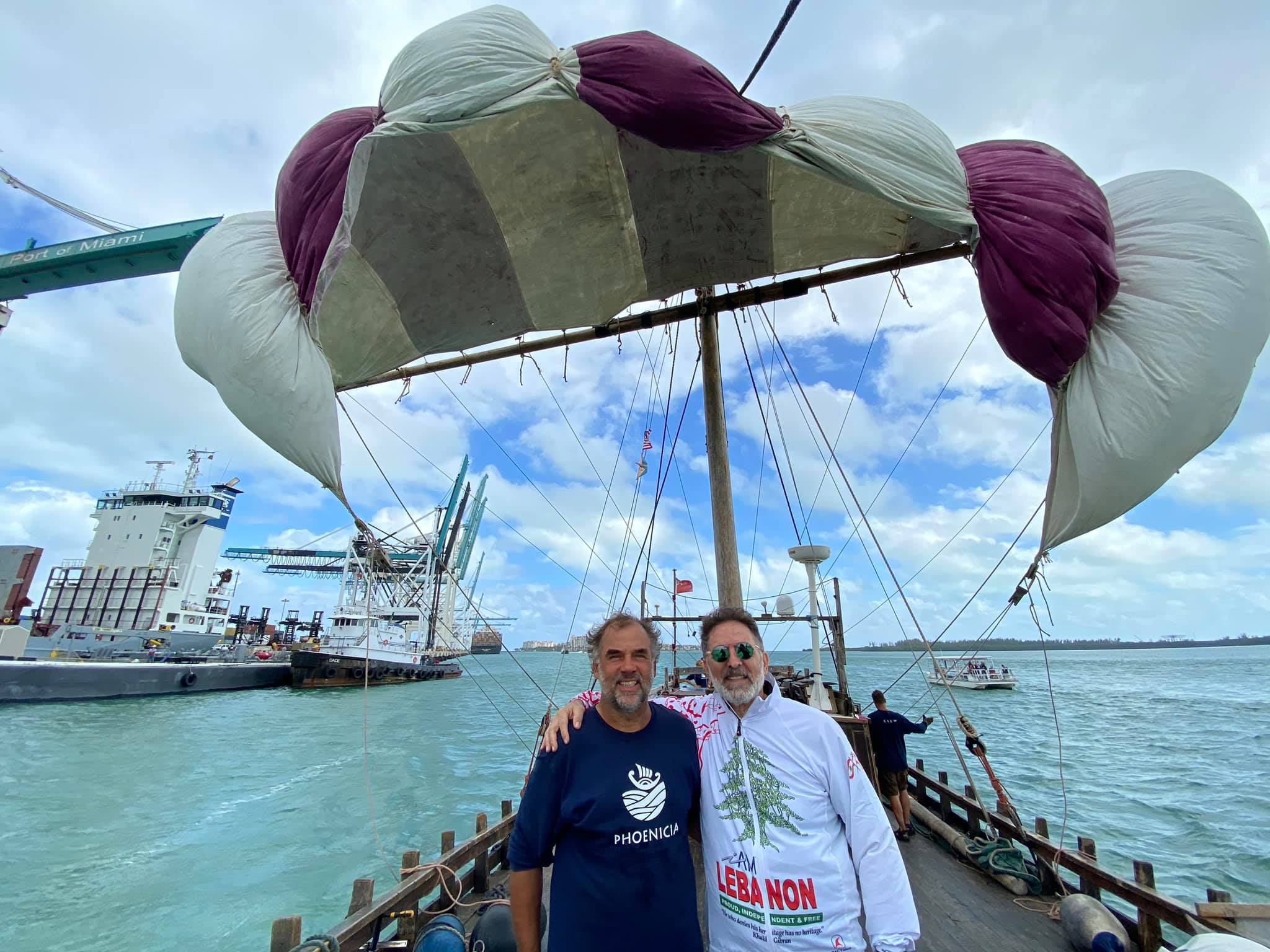 Shake-A-Leg Miami and Anthony R. Abraham Foundation welcomed the replica Phoenician ship this past Feb. 10 for week of celebration, education.
MIAMI – Feb. 10, 2020 – The Phoenicia, a replica of a 600 BC Phoenician ship, arrived at Shake-A-Leg Miami, the sailboat’s only Miami-Dade County port of call after a five-month, 6,000-mile maiden voyage across the Atlantic Ocean.

A fanfare greeting meet the 67-foot wooden sailboat, including a flotilla escort along Biscayne Bay as it traveled south past the Miami skyline. Thanks to Miami- Dade County and City of Miami Fire Department fireboats escorted the Phoenicia past down town Miami to Shake A Leg Miami in Coconut Grove with a water salute and music by the Christopher Columbus High School marching band at Shake-A-Leg Miami in Coconut Grove, 2620 South Bayshore Drive, Miami FL 33133.

Shake-A-Leg will host educational events surrounding the ship throughout its stay sponsored by the Anthony R. Abraham Foundation.

“Shake-A-Leg Miami is a relevant port of call for the history being created by the Phoenicians Before Columbus Expedition. The success of this voyage clearly proves it was possible for the ancient civilization to sail the Atlantic and reach the Americas 2,000 years before Columbus. The Phoenicians were known for their seamanship, which is among the skills taught at Shake-A-Leg to the underserved and the disabled in our community.

I am proud as a Lebanese descendant to have a role in making this educational endeavor and celebration happen for these amazing organizations,” said Thomas Abraham, chairman of the Anthony R. Abraham Foundation.

The Phoenicians, who occupied modern day Lebanon and the coastal areas of Syria and Northern Palestine, were recorded for their sailing abilities and credited with inventing the keel, the battering ram on a ship’s bow, and caulking between planks. The expedition is endorsed by the Ministries of Information and Tourism of the Republic of Lebanon. The project was designed with the help of the U.S.-based Phoenician International Research Center.

“We are pleased to provide a berth to the Phoenicia and look forward to the educational opportunities it will provide. Field trips from area schools are scheduled so children can learn the history of the Phoenicians and their seamanship and about the importance of caring for our oceans. It’s an exciting moment for all of us,” said Harry Horgan, founder and CEO of Shake-A-Leg Miami.

During its voyage, the expedition conducted research on plastic pollution levels in the Mediterranean and Atlantic as part of the United Nations Environment ‘Clean Seas Campaign.’ Crew members took daily water samples to measure micro plastic levels to raise awareness about plastic pollution in the ocean.

The expedition was launched in September from the Republic of Tunisia, where numerous organizations gave support, expedition supplies and services. The ship’s crew consists of 12-15 skilled, amateur and novice sailors for each leg of the trip. Before reaching the United States, the ship made port in the Dominican Republic. Built in 2008, the ship earlier completed a voyage around Africa under expedition leader – Captain Philip Beale and proved it was worthy of the Atlantic voyage.