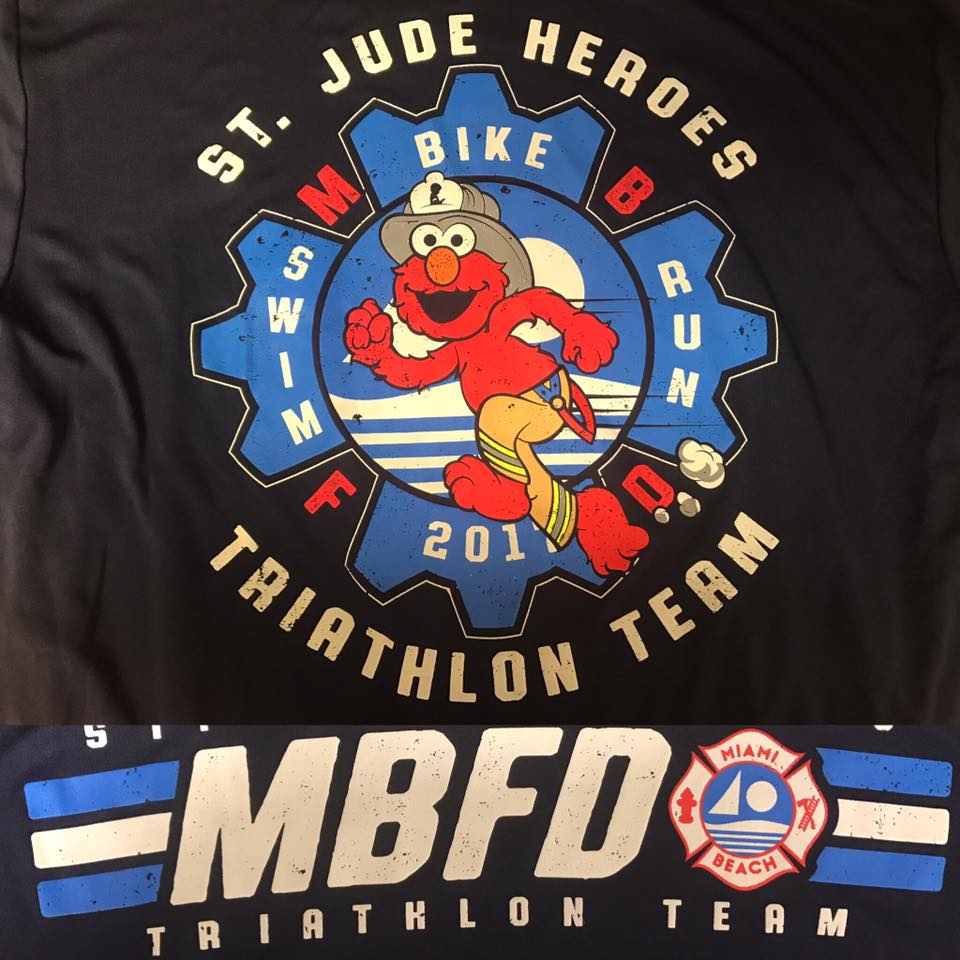 The Anthony Abraham Foundation it is very honored to have the Miami Beach Fire Fighters join the St. Jude Hero Team racing with us Sunday at the South Beach Triathlon. #iamStJudehero #AbrahamFoundation
GodSpeed! 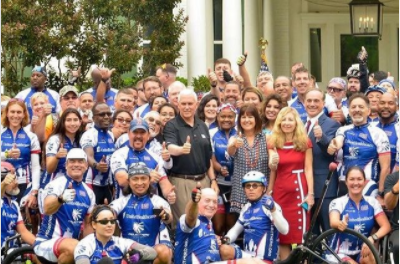 Celebrating Project Hero Veterans at Vice President Pence Residence. Today on Behalf of the Anthony R. Abraham Foundation I participated in the Start of the Washington to Virgina Beach Challenge, we heading to the V. P. House to meet the VP and his Wife and Also the Secretary of the VA. The ride was sober in that we passed the Pentagon were so many lives were lost on 911. #AbrahamFoundation

On Behalf of the Anthony R. Abraham Foundation, it is such an Honor and Privilege to have the opportunity to participate in the Project Hero Washington D.C. to Virginia Beach Challenge.

The Wounded Veterans participating in this Challenge will be cycling over 350-plus miles through Virginia in the 10th United Healthcare Memorial Challenge presented by Boeing Corporation which kicks off with V.P. and Mrs. Mike Pence and VA Sec. Dr. David Shulkin
The Pence’s oldest son is in the Marine Corps and Dr. Shulkin has been a leader in public/private partnerships to eliminate veteran suicide including an authorization memo with VA Medical Centers and Project Hero.

More than 150 wounded veterans and supporters will begin a more than 350-mile ride from Washington D.C. on Monday, May 29. The 2017 “United Healthcare Memorial Challenge presented by Boeing” benefiting the injured veteran riders of Project Hero, is a non-competitive, therapeutic bike tour that will traverse from Washington D.C. to Manassas, Fredericksburg, Richmond, Williamsburg and then to its conclusion in Virginia Beach on June 3.
Project Hero is a national nonprofit organization that helps veterans and first responders affected by injury, post-traumatic stress disorder (PTSD) and traumatic brain injury achieve rehabilitation, recovery and resilience in their daily lives.

This is the second opportunity I have had to ride with the Project Hero Veterans in the Washington D.C. to Virgin Challenge with my dear friend and Founder of Project Hero John Wordin.

We are working hard on a major project for South Florida which you will hear more about during the Untied States Conference of Mayors meeting which will be held in Miami Beach in mid June. The Abraham Foundation believes so strongly in the need to provide every type of service that benefit our men and woman of the armed services and our first responders who have sacrifice so much for us .

On Memorial Day we should take a time to share a silent moment with family and friends to reflect on all those brave men and woman who have given the ultimate sacrifice of their lives.

We salute you on Memorial Day for giving America the most treasured gift, our Freedom to be Americans.
God Bless You all and God Bless America.

As Chairman of the Anthony R. Abraham Foundation it is our stated mission to , “To Love, Honor, Respect and Empower the Lives of the Suffering, Hopeless and Forgotten”.

We have been asked many times from charitable institutions, what is it that you’re looking for when you decide to contribute to a charity that is requesting funding from the Abraham Foundation?

The answer to that question is simple, we are looking for individuals and institutions that live up to the principles which we uphold as our standard for committing our precious resources in support of those charitable institutions requesting funding from us and that is they must embrace with passion , “To Love, Honor, Respect and Empower the Lives of the Suffering, Hopeless and Forgotten”.

Institutions of higher learning have a mandatory responsibility of teaching the fundamentals of good stewardship supported by the pillars of moral and ethical responsibility if we have any chance to secure a everlasting civil society that ensure that all citizens are treated equally with Love and Respect.

As citizens of the world we have to teach by example the basic principle of good etiquette which has been lost in this fast passed technological advance society.

One of the most amazing reasons why we were so attracted to Care Elementary, was it leadership and the lifestyle they were following and empowering in the environment they were creating for these children who’s lives and home-front they live did not always provide them with a Safe Haven.

We complement the Enthusiasm and Spirit of Faith that is being showcased and taught at Care Elementary and look forward to continuing to being a small part of the transformation of this amazing institution.

What CEO in this country would not like to have individuals working for them that exemplified the spirit of knowing how to provide comfort and a willingness “To Love, Honor, Respect and Empower the Lives of the Suffering, Hopeless and Forgotten”, and to utilize those innate gifts of Empathy, Love, Compassion within their work environment?

Congrats to the Whole Staff of Care Elementary You Truly Are the Guardian Angels of Our Next Generation.

Posted in 2017Leave a Comment on Supporting Care Elementary

A Letter of Thanks from a St. Jude Family 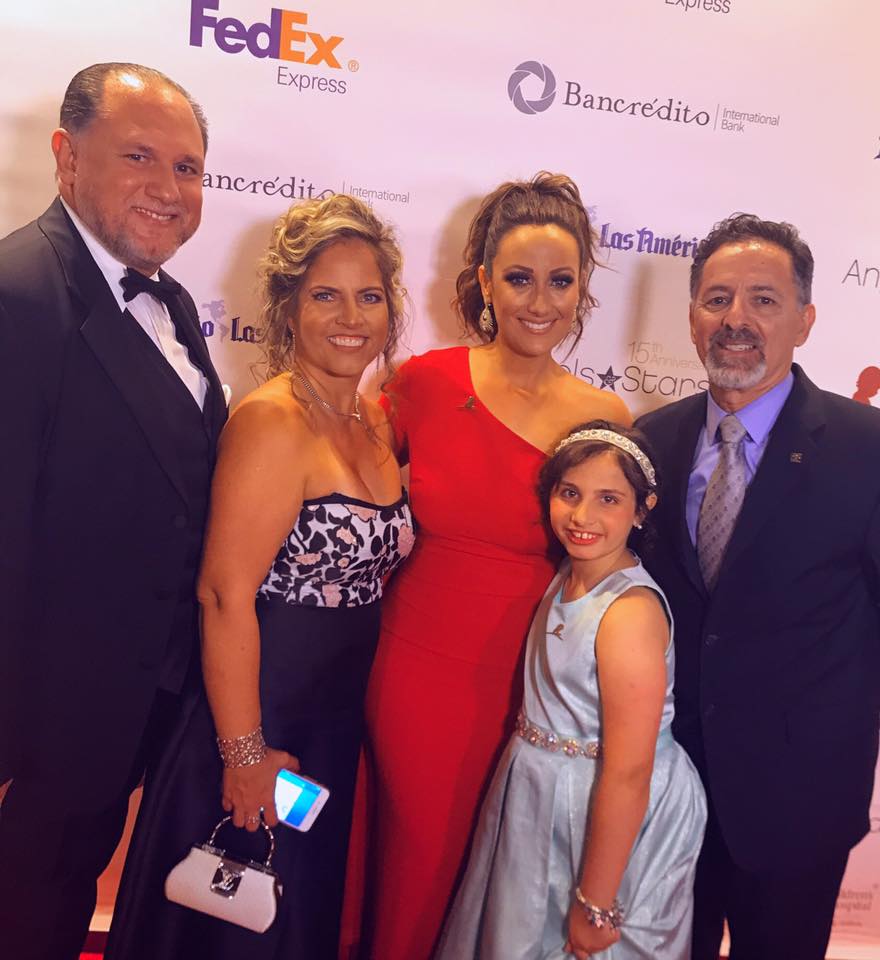 St. Jude Gala May 20,2017 Intercontinental Hotel Maimi FL.
An open letter of thanks from a St. Jude Family- Looking for a Glimmer of Hope!
“Mr. Abraham
Thank you once again for all that you did for Victoria and my family. Victoria went to St.Jude on July 2016 and went through another operation and 30 sessions of proton radiation.
We left St.Jude in September 2016 and returned in February 2017 and we will be back June 12-15, in which we hope and pray that we will receive good news and that the radiation impacted the tumor that Victoria had and still has in her head which grew into her brain.
She has a meningioma tumor stage 2 and lost all sense of smell but lucky we were able to safe her vision.On behalf of Victoria, my wife Damary and I we are forever grateful to you and your amazing father for what he help to start.
She has been through 3 major surgeries
During her second surgery she had a stroke and lost all movement on the left side of her body. After she recovered from the stroke she had a seizure and lost all sense of the left side of her body again. In her second surgery as well she lost all sense of smell but we were able to save her eye sight. The battle continues but she a strong amazing superstar and she will beat this. ”
So compelling is the need to find a cure for all these family’s facing the unthinkable consequences of the catastrophic diseases inflicted on their innocent children, the Anthony R. Abraham Foundation is proud to be apart of Danny Thomas Dream “that no child shall die in the dawn of life. Our hearts and prayers go out to each and every family that is faced with the daunting challenges of keep the faith and trust in the Almighty and the Miracles being performed at St. Jude Children’s Research Hospital.
Thanks to all the supporters of St. Jude you are so instrumental in fighting the battles of “finding cures and saving lives”
GodSpeed!
Thomas Abraham

Posted in 2017Leave a Comment on A Letter of Thanks from a St. Jude Family